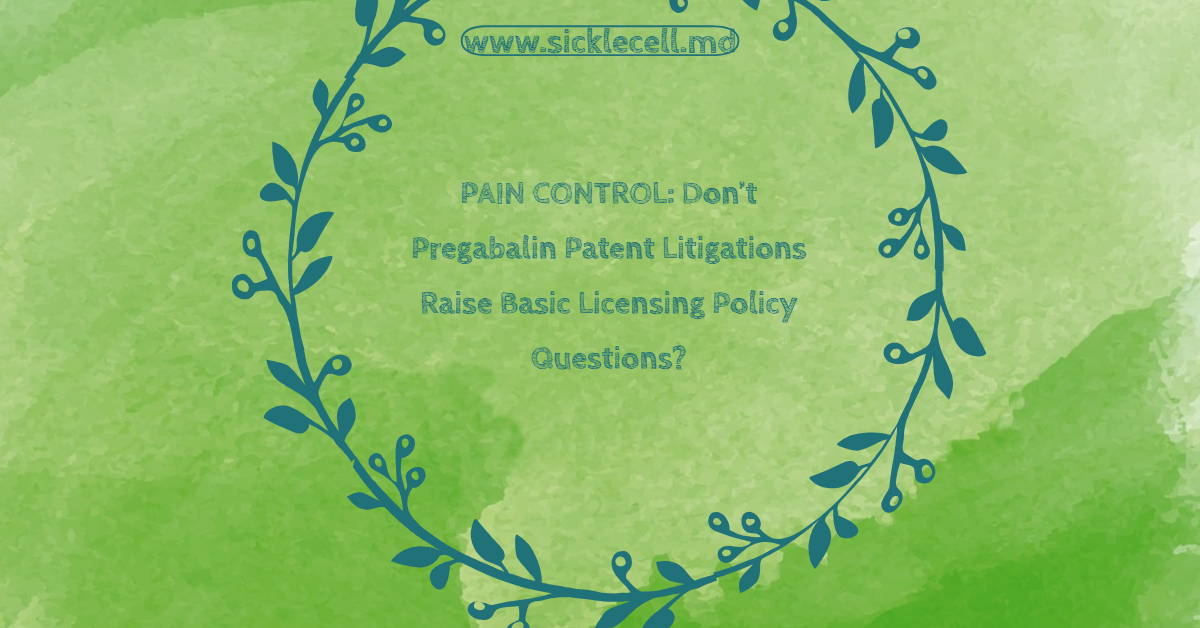 The painstaking way (pun intended) that “a doctor, a pharmacist, and a patent attorney” [1] have analysed the 2013 to 2018 “on going disputes around pregabalin” (British Medical Journal June 9 2018, page 358) needs commendation. I don’t comment on particular details because “Supreme Court decision is due soon” [1], but pertinent questions need answers. This excellent account implies how powerful Drug Licensing Authorities are. It is only after drugs have been licensed that MHRA, NHS, NICE, or BNF issue instructions.  Can we identify the composition of Licensing Bodies so we may hold persons to account individually when undesirable sequelae follow their decision to license a particular drug?

Adverse Clinical Consequences Following Licensing One Drug and Not Another

I realised over 20 years ago the power Drug Licensing had in the UK when I began pointing out that Morphine and Diamorphine, through respiratory suppression, killed sickle cell disease patients in painful crises.  “If the patient dies” I said in Lancet “sickle cell crisis and chest syndrome will be recorded on the death certificate” [2 3]. When a UK Professor of Obstetrics & Gynaecology [4] advocated Morphine for sickle cell crisis patients in pregnancy, I said in BMJ: “The question that puzzles me is: Why do west African and West Indian patients with sickle cell disease who did without morphine in their countries have to be given morphine pumps during sickle cell crises when they come to the United Kingdom? In any case, in obstetrics what happens to foetal respiration when morphine is used?” [5]

Professor Elisabeth Goodman [6] found Ketorolac as good as Morphine with no   respiratory depression in vaso-occlusive crisis but Liesner, Vandenberghe and Sally Davies said “Ketorolac has no product licence in the UK for this indication” [7]

How extraordinary that a drug that did not kill patients had no Product Licence in the UK, but Morphine and Diamorphine that killed sickle cell disease patients as NCEPOD later confirmed [8] was, and still is, licensed “for this indication”! Indeed, despite NCEPOD’s damning patients-dying-from-Opiate-Overdose Report NICE issued Guidelines advocating Diamorphine intravenously in sickle cell crisis [9].

Cecilia Shoetan’s heart-rending BMJ report of her breathless 32-year-old sickle cell disease daughter dying within seconds when Diamorphine (licensed for this indication) was given intravenously in a London hospital while she stood watching [10] makes frightening nonsense of the NICE Guidance [11].

The July 2007 Scottish Medicines Consortium (SMC) advice regarding Pregabalin differs from its April 2009 directive [12]. Meanwhile, NHS England had her own rules.  Witness the extraordinary situation in which NHS instructed doctors to depart from their usual prescribing for pain [13 14]. Who best should instruct doctors on prescribing practice? When Dr Margaret McCartney asked “Why do we have to prescribe branded Lyrica for pain?” [15] whom was she addressing? Well may Dr Laurence Leaver ask “With friends like NHS England, GP’s do not need enemies” [16].

Just 9 months ago we read “UK government to reclassify pregabalin and gabapentin after rise in deaths” [17]. Such reclassification is a forensic exercise. Disobey instructions and the Law could be after you. Can Freedom of Information identify individuals using “MHRA” or “NHS” or “The government” or “NICE” as cover to issue “not fit for purpose” guidelines? [18] Please investigate MHRA etc Competing Interest Declarations [19]. Pharmacovigilance in a developing country like Ghana has as many as 6 levels of vigilance and each level has potential for corruption [20]. Developed countries are no better, as Dr James Le Fanu exposes in his remarkable book recommended below.

The Le Fanu Legacy for Thoroughness

The name “Le Fanu” is music to Ghanaian ears. Korle Bu Hospital was planned and designed by Dr C V Le Fanu in the early 1910s in Colonial Gold Coast [21]. The outstanding Governor Sir Gordon Guggisberg [22] in 1919 “gave it top priority in his government’s building programme” [21] and when he opened it on 26 October 1923 he wanted it to “acquire a reputation second to none in the medical world”. One of the remarkable members of staff was another Le Fanu, Dr G E H Le Fanu who in 1909 led his laboratory in carrying out “a successful experiment to manufacture active vaccine lymph, locally, for small pox vaccination” [21]. Gold Coast Hospital, renamed Korle Bu Hospital, went on to do exploits including Dr Hideyo Noguchi’s Yellow Fever work. [21]. Meanwhile Dr G E H Le Fanu and colleagues including Dr Albert Hawe continued to tackle Tropical Diseases in a most thorough way [21 23]. Today, a Third “Thorough Le Fanu,” James, whose masterpiece “TOO MANY PILLS” is a ‘Must Read’ for every doctor mentions eight Big-Pharma companies that were fined a total of $Billion10.813 Dollars “for corrupt and illegal practices 2007-2012”. [24, page 25]

PAIN and OPIATES in HOSPITAL DEATHS

“Hospital drugs left 456 patients dead” was Daily Telegraph’s front-page head-line Thursday June 21 [25] plus an Editorial description of “fatal doses of diamorphine and other inappropriate drugs” in Gosport War Memorial Hospital. Note that when the NCEPOD Report of 2008 revealed that between January 2005 to December 2006 “Nine out of the 19 patients with sickle cell disease who had pain on admission and who then died had been given excessive doses of Opiods” [9] there were neither front-page newspaper-headlines nor calls for prosecutions as we hear today about Gosport.

Why the difference? ANSWER: Not because the victims were black, but because Morphine and Diamorphine are LICENCED “for sickle cell crisis indication” in the UK, raising this question:  Does the whole area of Drug Licensing (Pregabalin included) not need looking into urgently?  And when Dr James Le Fanu publishes in the BMJ that “Mass medicalisation is an iatrogenic calamity” [26] do we not wake up to the fact that the very first rung of the ladder to any medicalisation is DRUG LICENSING?

Finally: “Diamorphine has no accepted medical use in the United States” [27]

Competing Interest: I come from a sickle cell disease home: My Trait Parents had 11 children – 3 of us had sickle cell disease, hence my never-ceasing opposition to patient-management of pain that shortens life in anybody. [2 3 5 7 11 28 – 36].

2 Konotey-Ahulu FID. Opiates for sickle-cell crisis? Lancet 1998; 351: 1438.
[“The question that puzzles me is: Why do west African and West Indian patients with sickle-cell disease who did without morphine in their countries have to be given morphine pumps during sickle-cell crises when they come to the UK?”]

3 Konotey-Ahulu FID. Opiates for sickle-cell crisis. Lancet 1998; 352: 651-652. [To David Bevan’s criticism (Lancet 1998; 351: p 1965) of white physicians who agree with Dr Konotey-Ahulu that opiates created addicts in hospital – “When I say routine opiates for sickle crisis are not the way to bring out these patients’ best potential in the long term I am glad to hear white physicians say the same…White physicians who, at the risk of being misunderstood by Bevan, voice their displeasure at what they see happening on their wards deserve commendation, not condemnation.”]

10 Shoetan Cecilia. I lost my Sickle Cell disease adult daughter minutes after being given Diamotrphine intravenously when she could not breathe. BMJ Rapid Response 3 June 2008 http://www.bmj.com/cgi/eletters/336/7654/1152-a#196520

14 Barbour James Re: Margaret McCartney – Second use of patents – why do we have to prescribe branded Lyrica for pain? (July 8 2015) “recent direction from a member of NHS health authorities that pregabalin prescriptions for chronic pain www.bmj.com/content/350/bmj,h1724/rapid-responses

16 Leaver Laurence B. With friends like NHS England, GP’s do not need enemies “pregabalin to change some to Lyrica, so that Pfizer can maximise their profits at the expense of NHS” www.bmj.com/content/350/bmj.h1724 (02 May 2015)

24 Le Fanu James. Too Many Pills – How too much medicine is endangering our health and what we can do about it. Little, Brown Book Group, London EC4Y 0DZ.

26 Le Fanu James. Mass medicalisation is an iatrogenic calamity. Profligate prescribing has brought a hidden a hidden epidemic of side effects and no benefit to most individuals. [PROVOCATIONS] BMJ 2018; 361: k2794. June 30, page 494.

28 Konotey-Ahulu FID. Management of patients with sickle cell disease. African Journal of Health Sciences 1998; 5: 47[ Commenting on article of Sally Davies and Lola Oni (BMJ 315: 656 -60) “what I feel is more important in the day to day management of patients with a view to keeping them out of hospital, is clinical epidemiology which includes the circumstances of crises. … I fear Davies and Oni’s statement that ‘The Central Middlesex management protocol uses morphine infusions’ will make morphine the accepted drug for sickle crisis management. The consequences of such an approach are dire, especially when some UK hospitals are already making diamorphine their first choice”.]

29 Ringelhann B, Konotey-Ahulu FID. Hemoglobinopathies and thalassemias in Mediterranean areas and in West Africa: Historical and other perspectives 1910 to 1997 – A Century Review. Atti dell’Accademia dell Science di Ferrara (Milan) 1998;74: 267-307