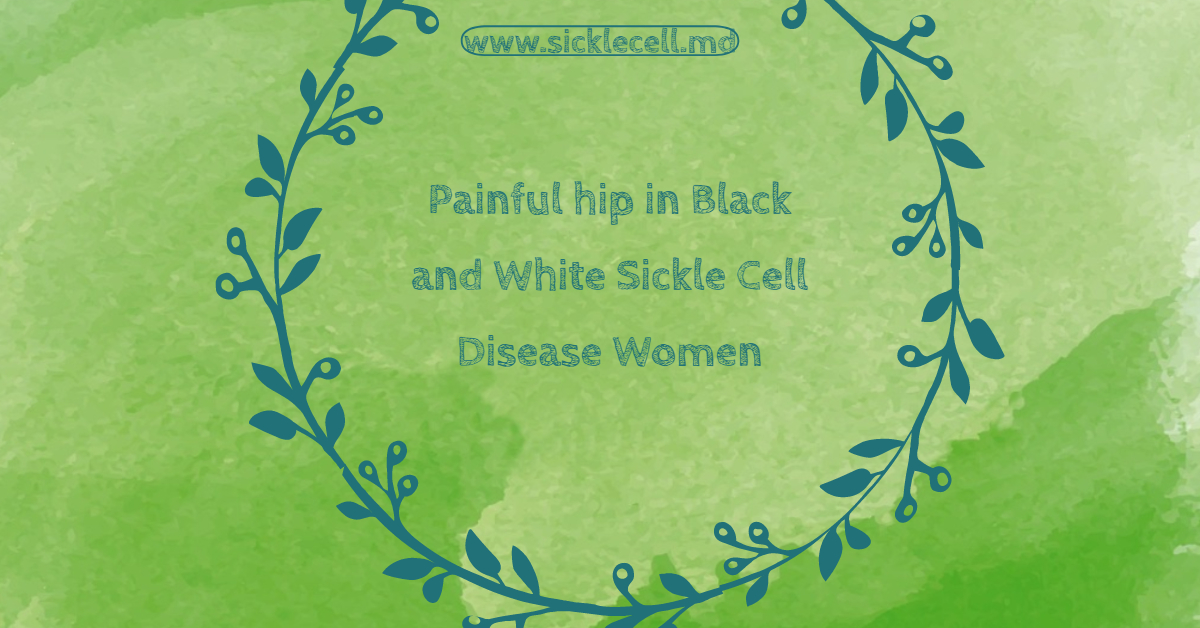 The article in the British Medical Journal of Lamb JN, Holton C, O’Connor P, Giannoudis PV. Avascular necrosis of the hip. BMJ 1 June 2019, Vol 365, p 325 (BMJ 2019; 365:I2178) mentioned a woman who had two pregnancies presenting with painful hip due to avascular necrosis of the hip, but the authors neither associated the pregnancy with the hip problem, nor did they mention the nationality of the patient. They listed sickle cell anaemia among the factors that could cause the particular hip problem of avascular necrosis but there was nothing to show that the lady the authors wrote about had sickle cell anaemia which is known to occur in white as well as black patients.

I wrote to the British Medical Journal responding to the article, and required more information about the nationality of the patient, and whether haemoglobin electrophoresis was done to prove “sickle cell anaemia” (SS) or sickle cell haemoglobin C disease (SC) which latter, I said, was more to be associated with hip necrosis than the former because the blood was thicker in the “SC” than the “SS”. But when the article was published my queries were omitted, and information that would assist GP’s in the UK and elsewhere appeared to have been excised inadvertently even though the references to the information were retained: Konotey-Ahulu FID. Avascular hip necrosis: sickle cell haemoglobinopathy predominates worldwide. June 1 2019 https://www.bmj.com/content/365/bmj.l2178 BMJ Rapid Response to Lamb JN et al 1 June 2019, Vol 365, p 325 (BMJ 2019; 365:l2178.

I took advantage of BMJ publication a fortnight later June 15 asking whether MEDICAL FIRMS should come back – a “Firm” being the term used in the days I was a medical student over six decades ago to comprise a Team of doctors in a Teaching Hospital from Consultants down to House Officers and supporting staff in such a cohesive form as is missing today – I took advantage of this BMJ publication to bring back the sections that were missing in my June 1 article so that GP’s may see the true nature of hip problems in both black and white sickle cell disease women demonstrated admirably by Professor Malcolm Milne’s excellent Firm at Westminster Hospital on a postgraduate ward round in 1962.

Should we bring back THE FIRM? Yes, please! Firms Vary In Excellence: Pregnancy and Sickle Cell Hip Necrosis Revisited.

BMJ’s Cover Page question 15 June 2019 “Should we bring back THE FIRM?” [1] helps me to draw attention to Professor of Medicine Malcolm Milne’s Firm at Westminster Hospital same period as that of Professor Harold Ellis who says of those days “The firms were wonderful”?.[2]. I totally agree. I knew both firms as a postgraduate chasing MRCP’s. In fact, Harold Ellis removed my appendix in August 1963, and you could hardly see the 1-inch long scar. Their Firms were remarkable; that was why I was peeved when the Grand Round of Professor Malcolm Milne that I described in response to Jonathan Lamb and Colleagues’ article on aseptic necrosis of the hip [3] was inadvertently removed. [4]. I reproduce below those sections edited out by mistake, even when their references were retained. GP’s that Lamb et al had in mind for education need these facts about the hip in sickle cell disease. Doctors must think “multiple pregnancies” when an African woman walks into their consulting room with a limp. They must take a detailed history of how long they have been in labour because Lamb and colleagues mentioned two pregnancies [3], but nothing about length of labour which, with legs in prolonged abduction, compromises blood supply to the femoral heads doing worse damage to the high haematocrit sickle cell haemoglobin C disease (SC) and sickle cell beta-thalassaemia (Sbeta-Thal) patients than in sickle cell anaemia (SS) [5-8].

FIRMS OF PROFESSOR HAROLD ELLIS AND PROFESSOR MALCOLM MILNE WERE MORE EXCELLENT THAN SOME OTHER FIRMS.

Medical and Surgical Firms were not equally efficient. Which Medical Firm in the UK would assemble (like Professor Malcolm Milne’s did) the author of an article 8 years earlier (Joe Humble) [8] diagnosing sickle cell disease in a white lady (Greek), then ask an African postgraduate (myself) on Grand Rounds to examine her using clinical approach only (History, Observation, Palpation, Percussion, Auscultation) to arrive at a Clinical Diagnosis of “Sickle Cell beta-Thalassaemia with cholelithiaisis and avascular necrosis of humeral and femoral heads”, then turn to Dr Joe Humble: “Show us the Electrophoresis Strip”? That whole section of my Rapid Response a fortnight ago [4] was excised. I reproduce it so GP’s and others may learn from it. Read this together with my earlier response which stated: “the sickle cell gene frequency in some white people in Greece and in Eti-Turks is greater than that in my own country Ghana”. [4 7 8]. See the excised portion before “Jonathan Lamb et al list fewer conditions …”[4]:-

These and their offspring are scattered around the world including the UK. A white woman was correctly diagnosed by me 57 years ago exactly on Professor Malcolm Milne’s Westminster Hospital Postgraduate Grand Rounds using just History (“I come from Greece”), Examination (icteric eyes, scar in right hypochondrium, loss of left shoulder contour due to angulation, and frequent joint pains) as (in my own words) “Sickle Cell beta-Thalassaemia disease with cholecystectomy for pigment stones, and aseptic necrosis of the left humeral head”. Haemoglobin Electrophoresis was produced on the ward round to confirm my clinical diagnosis by Consultant Haematologist Dr Joe Humble [8, page 240] who 8 years earlier had identified the same lady as having sickle cell Thalassaemia [9].Trained in London University in the 1950’s by the likes of Sir Richard Bayliss (Queen’s Physician) I was trained as it were for the bush in order that I could make diagnoses without X-rays. The luxury of MRI did not exist. Fortunately, there are some GP’s in the UK today who can make this kind of clinical diagnosis on History and Examination alone.

Jonathan Lamb et al quite rightly mention pregnancy: “She had recently given birth to her second child”. [3] I would like to know how long she was in labour for because prolonged 2nd stage of labour we found in Ghana to be one of the precipitating causes of this condition in the multiparas. I once commented thus:
“The peculiar selection of the hip joint for such crippling pathology might have some eugenic significance [5 7 8]. Some of the Hb SC disease women with bilateral hip involvement complained of inability to separate their thighs for coitus, seriously endangering marital relationships, while many of the male patients with hip involvement find coitus impossible because body movement of any sort produces agonizing pain (Illustrative Case Histories 44, 46 and 48” [Ref 8 below].
I went on: “It seemed to me that in addition to priapism this is a further means that Nature has devised to limit dissemination of the sickle cell gene” [8, page 240].

1. What is the nationality of this lady? Ringelhann and I described in some detail Mediterranean and West African Haemoglobinopathy and G6PD Deficiency. [10]

2. How long was she in labour for in both pregnancies?

3. What does the Haemoglobin Electrophoresis show? I once described two Sickle Cell Haemoglobin D disease girls with an English father (“AD” phenotype) and Ghanaian mother (“AS” phenotype) [Case History 133 in Reference 8]. The “SD” phenotype can be as severe as the “SS” (Sickle Cell Anaemia). Another reason why Hb Electrophoresis is important even when Sickling Test is Negative is that in my 36 consecutive homozygous Haemoglobin C disease patients in Ghana “the 35th presented with hip pain”. [8]

Jonathan Lamb et al list fewer conditions that cause aseptic necrosis of the femoral head than the 25 that J E Nixon [11] listed in 1983 in the Journal of the Royal Society of Medicine, but their article [3] has admirably succeeded in alerting clinicians about this condition which afflicts not just Africans and Caucasians but the entire world. We await answers to the 3 questions listed above, but note that Sickle Cell Anaemia “SS” is not the same as Sickle Cell Haemoglobin C disease “SC”. Sickle Cell Trait is “AS” phenotype.

7 Konotey-Ahulu FID. Pattern of Sickle Cell Disease in Accra. A Study of 1550 consecutive patients. Dissertation presented to University of London for the Postgraduate Diploma of Doctor of Medicine 1971. Awarded MD(London) February 1972.