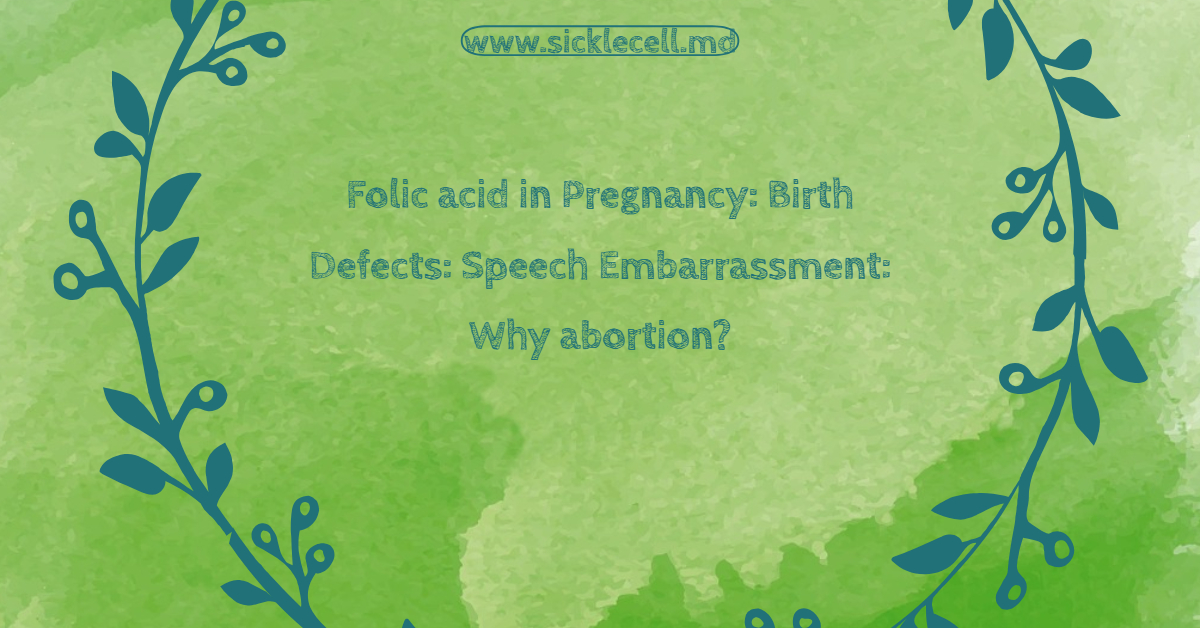 In addition to the “birth defects such as spinal bifida and anencephaly” (BMJ 20 0ctober 2018) that “flour fortified with folic acid” [1 2] is expected to prevent when given in early pregnancy, I did state ten years ago that “a mere 500 micrograms daily is known to prevent cleft palate” [3] – a seemingly minor defect but which in the tribal setting constitutes a formidable social pathology [3 4].

SOCIAL PATHOLOGY OF CLEFT PALATE IN THE AFRICAN

How would any BMJ reader feel if when saying “I have scrubbed”, what is heard is “I have passed wind?” The extraordinary thing about this state of affairs is that the speaker is quite unaware that what was just heard was tantamount to blasphemy in Krobo/Dãngme-Gã Mother Tongue where every vowel not only has at least 3 reproducible pitches but also 2 distinct qualities – non-nasal and nasal [5]. Cleft palate phonates nasal and, coupled with any of the 3 distinct pitches, imparts 6 different meanings to the same consonant. I say that again: a vowel in my Tribal Tonal Language imparts 6 different meanings to the same consonant depending on its pitch and quality. [3-6]

“Osa” in Krobo/Dãngme (“Osha” in Gã) [Low High vowel-pitch sequence] means “you scrubbed”. Nasalise the second vowel, same pitch sequence, and you have said “You passed wind” [Osã and Oshã respectively]. Even using the tribal devulgarising prefix “Tafracher!” [7] can never excuse the utterance of such a thing in public. The embarrassment is complete. “It is, therefore” I once remarked “a social disaster of enormous proportions if when an African wants to say she has scrubbed, she is rather heard to say unmentionable things because of cleft palate. The need for early correction of this defect cannot be overemphasized. Any African baby with cleft palate stands in great danger of being ostracised in later life, and should be helped immediately” [4, page 10].

TERMINATION OF PREGNANCY FOR CLEFT PALATE?

Nicholas Wald of the Wolfson Institute of Preventive Medicine at Queen Mary University of London is quoted by the BMJ as saying if it is officially confirmed that within weeks flour will be fortified with folic acid “the UK is taking an important step in preventive medicine and helping to avoid disability or termination of pregnancy” [1]. In a Parliamentary Written Question 114833 “Abortion: Cleft Palate” Jim Shannon (Strangford) asked the Secretary of State for Health on 21 November 2017 “how many abortions there were in each of the last 15 years in which the fetus had a cleft palate (a) palate or (b) lip, …” by residents in England and Wales [8]. Answering, Jackie Doyle-Price said that for all gestations there were 9 in 2013, 10 in 2014, 11 in 2015, and 9 in 2016.

IF GHANAIANS COULD DIAGNOSE PRENATALLY WOULD THEY ALSO ABORT?

Certainly Not! At least for one interesting reason: Dr Albert Joseph Hawe MD FRCP OBE CBE was the most well-known white Colonial Doctor the Gold Coast (now Ghana) had ever known for 50 years [9]. He was the doctor stationed at Akuse 10 miles from where I was born in Odumase Krobo, and it was he who so expertly looked after me in the early 1930’s when I was often sickly that my first words in English were “When I grow up I shall go to England. When I grow up I shall be a Dorkita like Dorkita Hor”. His contemporary in our British colony was Dr Cicely Williams who first described Kwashiorkor in my tribe [10 11]. I was amazed when I discovered that the white “dorkita” who had looked after me as a toddler was one of the two Consultants (the other was Ghanaian Dr Silas Dodu) whom I was assigned to work with as Medical Officer on my return from the UK after registration.

My second discovery was that the heavily nasal diction of Dr Albert Hawe was due to Cleft Palate/Lip the scar of repair of which was a prominent feature of his physiognomy! If this remarkable Englishman had been aborted he would not have been in Colonial Gold Coast to work in my tribe and help save my life. But in order that it might not be construed that cleft palate abortion practice in England and Wales had no equivalence in Africa thus proving our superior ethical stance in these things I, born with extra-digits deformity (Mendelian Dominant 1% incidence in Ghana) [12], need to mention what I once said in the BMJ [13] which Professor Sir David Weatherall FRS drew attention to in his excellent textbook “The New Genetics and Clinical Practice”[14]: My Krobo Tribe in south east Ghana cared little about extra digits which they just tied firmly at birth and watched them atrophy and fall off. My stubs are there for all to see today. The tribe east of us beyond the Volta River would rejoice at the sight of a new-born baby with extra digits – destined to be rich. The tribe west of us beyond the hills would drown a baby so deformed until the practice was stopped by missionaries and the Colonial government. The UK “scientific tribesmen” as I described them in the BMJ [13] might have suggested I be aborted alongside pregnancies with cleft palate and sickle cell disease’

DISCUSS WITH AFRICANS WHAT UK LAW ALLOWS BUT ETHICS DISALLOWS

Cleft-palated Dr Albert Hawe for over half a Century treated Ghanaians who then came to England and were told that it would soon be legal to terminate an up-to-term pregnancy because cleft palate had been unmasked through ultrasonography. A procedure that was legal by UK Law would be interpreted in the African mind as perfectly alright. Indeed, it is taught that haemoglobinopathy may be diagnosed prenatally and termination suggested to parents when some of my patients were far brighter than their siblings. [15]. World Class Clinical Geneticists Professor George Fraser [16] and Professor Sir David Weatherall [14] have always emphasized ETHICS in these considerations.

Competing Interest: Born with extra digits – a defect for which termination has been done in the UK [17] Twitter: @profkonoteyahul

2 Campbell D. Folic acid to be added to UK flour in effort to reduce birth defects.Guardian 14