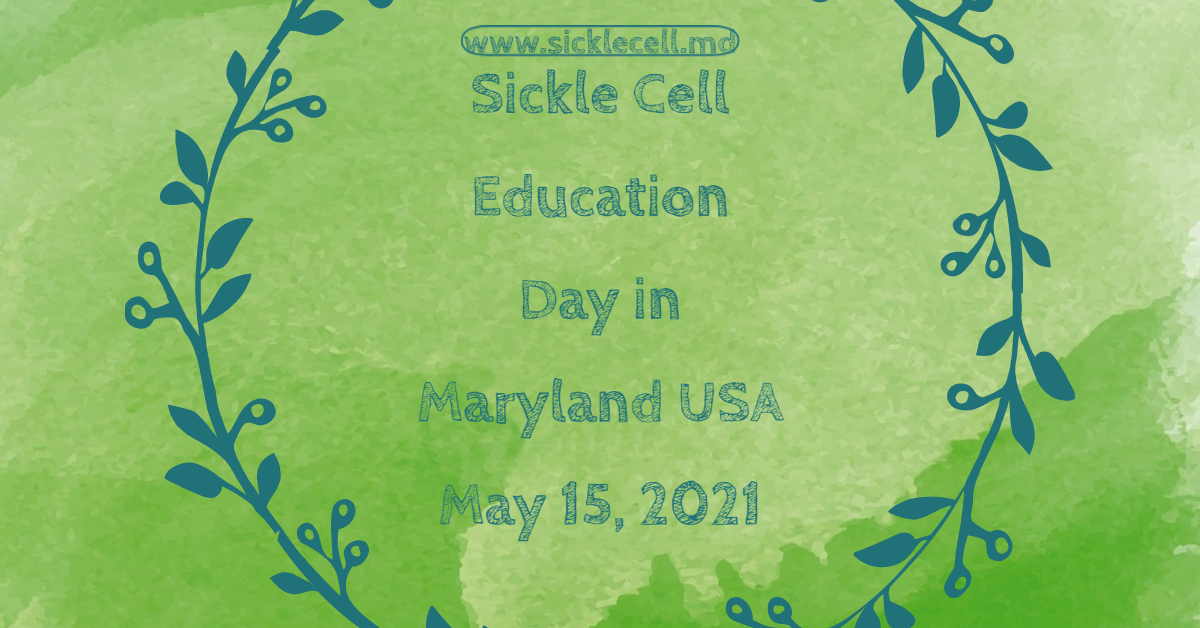 Sorry, your Registration Procedure was not geared to record my UK phone number so I could not join you to contribute something and to answer questions that could have cropped up. The following is rather lengthy.

My www.sicklecell.md shows how patients can overcome their Sickle Cell Disease and achieve great things in life. Introducing myself, listen to   Professor Helen Ranney MD PhD of Albert Einstein University College of Medicine in New York: “There is no single clinical experience in the United States comparable to that of Dr Konotey-Ahulu”.

She observed that I always placed “The Patient” above “The Disease”.

My book “The Sickle Cell Disease Patient” with 643 pages including 133 Illustrative Case Histories plus thousands of References, and the Foreword by Howard University’s famous Professor Roland Scott MD, describes all that patients require to help them stay out of the hospital and to achieve great things in life. Not Gene Therapy. Order the book from my website, discounted to £30. It deals with The Patient.

I am no stranger to Maryland. Your Professors Lemuel Conley and Samuel Charache of Johns Hopkins University Medical College had invited me to do Grand Rounds more than once with them at Baltimore.

On one occasion I showed a slide to their students and physicians on “Sixteen Causes of Severe Jaundice in Sickle Cell Disease” which so impressed Professor Charache that he asked me to give him a copy of the slide. Some of their students who heard him quiz me on those Grand Rounds may well now be your present Physicians and Haematologists.

You can find the list of Sixteen Causes of Severe Jaundice in Sickle Cell Disease on page 174 (Table 13.7) of my Textbook analysing 1,500 Consecutive patients with Sickle Cell Disease in Ghana. I am prepared to send you a signed Complimentary copy of my book because of the friendship of Professors Conley and Charache in the past. Tell me where to send it by DHL (Address plus phone numbers). We were together on the WHO Expert Advisory Panel on Haemoglobinopathies in Geneva.

I was once gratefully surprised when Professor Samuel Charache gave me $150 on the spot in the Emergency Room in Baltimore for diagnosing Right Middle Lobe Pneumonia in a Sickle Cell Anaemia (SS) lady in sickle cell crisis, using “HIPPA” – the 5 Cardinal things taught me at Westminster Hospital School of Medicine, the University of London, by Sir Richard Bayliss MA MD FRCP, Physician of Her Majesty Queen Elisabeth II..

HIPPA stands for “History, Inspection, Palpation, Percussion, Auscultation”. After I announced the diagnosis aloud for nurses and doctors to hear, the lady was wheeled away to be X-rayed. When the diagnosis was then displayed on the screen, confirmed, and the $150 thrust in my hands I was hugely grateful because that amount of One Hundred and Fifty Dollars was equivalent to my 3 months’ salary as a Physician Specialist in Inflation-burdened Ghana. It was then I realised why several of the doctors we trained at home in exactly the way we were trained in the UK, found their way across The Atlantic to acquire Dollars that they sent back home to help relatives. Brain Drain meant Dollar Influx! Diagnose without X-rays and you get Dollars?

In later years I invited Professor Samuel Charache to International Conferences of Sickle Cell Disease Patient Achievers – The First at The Royal Society of Medicine in London 1993, and the Second in Accra, Ghana, in 1995 when he saw adult Sickle Cell Disease Patients who had never been regularly blood-transfused, and who had graduated from universities. The Hydroxyurea that Prof. Samuel Charache popularized was, and still is, more Disease-oriented than Patient-oriented in that the drug aimed at producing Foetal Haemoglobin F to displace the Abnormal Haemoglobin S with the view to diminishing transfusion requirements. Our ACHIEVERS’ CONFERENCES were aimed at showing off adult patients who were never on regular transfusions as was commonly practised in the UK and the USA.

We have adult Sickle Cell Disease Patients in their Seventh and Eighth Decades of useful life. One Sickle Cell Haemoglobin C Disease (phenotype SC) grandmother, and Women’s Golf Champion, attained the age of 83 years before finishing her Earthly Pilgrimage. During her first pregnancy when repeated urinary tract infections precipitated sickle cell crises some physicians suggested she abort the pregnancy, as was often the practice abroad. She flatly refused, and I concurred with her decision in 1960 when Dr Fred Sai let me admit her to Ward A at Korle Bu Hospital. Being myself born into a Sickle Cell Disease family I knew relatives who carried pregnancies to term. We carefully nurtured Mrs L. O. till she was successfully delivered of Twins by Dr Kwesi Bentsi-Enchil our experienced Obstetrician Gynaecologist. The Trait Twins are now grandparents and successful professionals in their own thriving businesses.

One ACHIEVER, D. A-B [SS (NORMACHE “AS” father x NORMACHE “AS” mother produced ACHEACHE)] trained to be a brilliant Nurse SRN in Ghana, went to Cold England to do Midwifery SCM, proceeded to the USA to specialise in Chemotherapy and wrote a Textbook. You can read the description of how she hydrated herself intravenously flying at over 30,000 ft more than once. See www.sicklecell.md BLOG “Lesson of the Week – Dorothy Amanor-Boadu SRN SCM – How I, a sickle cell anaemia woman, hydrate myself intravenously at 36,000 feet”

Her advice in bold letters to fellow Sickle Cell Disease Patients: “The moral for other patients reading this article is this: ANTICIPATE PROBLEMS, AND PLAN HOW TO COPE WITH THEM! If necessary, cancel agreed plans (like a flight) in order to save your life.”

Dorothy Amanor-Boadu attended all 3 SICKLE CELL DISEASE PATIENT ACHEVERS’ CONFERENCES in 1993 (London), 1995 (Accra), and in 2010 (Accra) for the Centenary of Herrick’s first description of Sickle Cell Anaemia in the USA. Great ACHIEVER that she is, she runs a Private Nursing Agency in Accra, and has authored a 186-page book entitled “CANCER CHEMOTHERAPY MANUAL” by DOROTHY S AMANOR-OWUSU. She was offered Bone Marrow Transplantation in the USA but refused. She does not think Gene Therapy is the answer either.

One hopes, GOD willing, Maryland Sickle Cell Disease Association can attend a 4th International Conference with their own ACHIEVERS. I was greatly saddened to learn that my good friend Professor Samuel Charache died on 29th January 2019 aged 89 years.

Listen to me interviewing Mr Ebenezer Tagoe with Sickle Cell Anaemia (SS), a great ACHIEVER now in his 7th Decade of life (born on Ghana’s Independence Day 6th March 1957). In 1993 & 1995 Professor Samuel Charache heard Ebenezer testify at both our SICKLE CELL DISEASE PATIENT ACHIEVERS’ CONFERENCES in London and Accra. At www.sicklecell.md  BLOG you can see him being interviewed live “Meet the Professor talking about Sickle Cell Disease patient live”. Mr Ebenezer Tagoe [SS=ACHEACHE (one S-ACHE gene from father, and another S-ACHE gene from the mother)] was counselled by me and he married an “AA=NORMNORM phenotype” lady. They had 2 “AS” Trait boys who graduated.

Ebenezer is now a qualified Pharmacist who had worked in a London Teaching Hospital, and now a successful businessman in Accra. While in London he was appalled by how many patients with Sickle Cell Disease were given Morphine and Diamorphine for Sickle Cell Crisis when he himself had never been introduced to it. He testifies that as he is a pharmacist, he has declined to take daily Hydroxyurea.

Ebenezer Tagoe is fortunate to have Doctors both in Ghana and England whom he described as “excellent” because they always listen to him. He was once going to be given Morphine after surgery in the UK to remove his gallbladder but he refused and asked to be given Ketorolac instead. At all 3 INTERNATIONAL ACHIEVERS’ CONFERENCES, Mr Tagoe announced that he avoided Sickle Cell Crises by drinking no less than 5 Litres of water a day. I now pass this information on to Maryland Sickle Cell Disease Association (MSCDA) members of which may like to contact him through me felix@sicklecell.md and he will be delighted to answer your queries.

Miss A. K. who is in her 6th Decade of life with Sickle Cell Anaemia is glad to answer questions through me. The only partial blood transfusion she has ever had was for hip replacement (aseptic necrosis). She keeps very well with haemoglobin level always between 7.5 and 8.5 grams per Deci-Litre which she is very pleased with.

Mr Ade Sawyerr with Sickle Cell Haemoglobin C Disease will answer queries about how to avoid sickle cell crises. He has valuable tips and I have taken him with me to answer questions when I am invited for Grand Rounds. Write to him through me.

This is one of the 16 causes of Severe Jaundice in Sickle Cell Disease. All new patients I saw in Ghana or UK or in Howard University Washington DC had G6PD enzyme level checked. Some good drugs harm patients with G6PD Deficiency as shown in – https://bit.ly/2sukoPW “G6PD Deficiency in Ghanaians: How to recognise it”.  Have all the patients in MSCDA been checked for G6PD Deficiency?

In a way, I am glad I could not join the webinar across The Atlantic because I could not have contributed a tenth of what I have just written.

Finally, GENE EDITING (CRISPR) is woefully unrealistic: How can this deal with the 34,000 babies born every quarter of the year with abnormal haemoglobin genes from both parents in West Africa? Genetic Counselling with Family Size Limitation [GCFSL] is more realistic. See my answer to the Sickle Cell Disease mother married to Sickle Cell Disease man in Tema, Ghana, and who had 13 children all receiving an abnormal haemoglobin gene from both parents causing hereditary disease in all of them. They continued having child after child hoping the next one will avoid hereditary disease but because each Parent had nothing but an aching gene to offer, all the 13 children ended up with ACHE from father, ACHE from mother to be ACHEACHE disease phenotypes.  See on my website how I responded to Mrs D’s reasonable question: “But Doctor: How do we prevent this Nwiiwii (Sickle Cell Disease in Fante) coming in further pregnancies?” Study the answer I gave the parents from the Video on my website www.sicklecell.md My invented kanad cubes are given free with every copy of the book – “kanad” stands for KONOTEY-AHULU NORM ACHE DICE