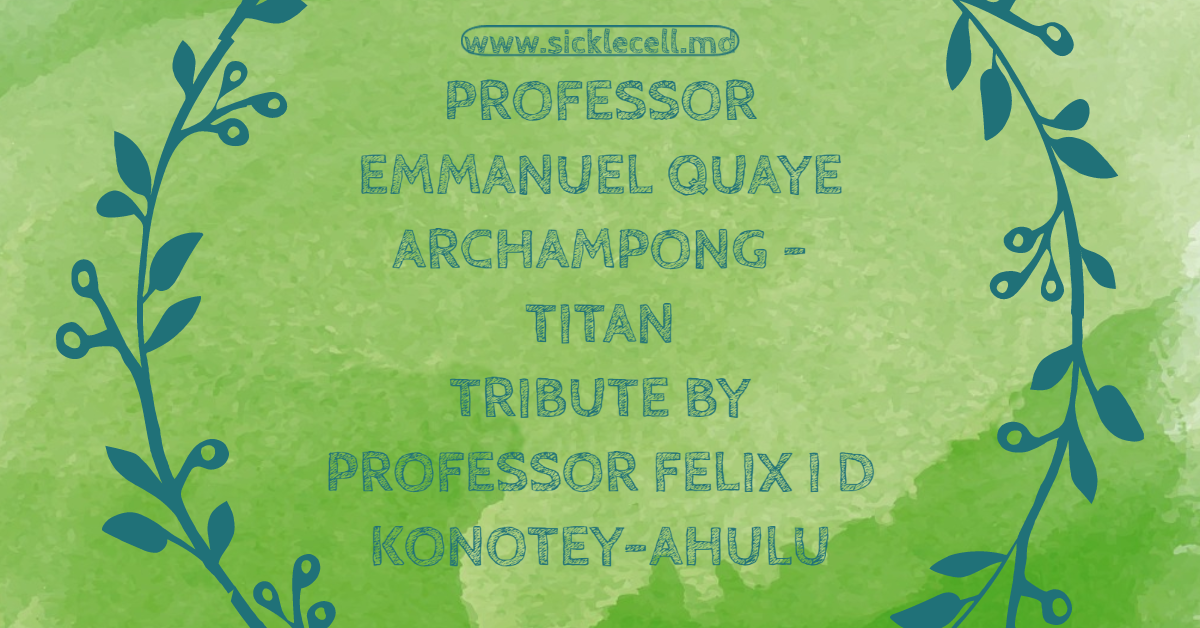 TRIBUTE BY PROFESSOR FELIX I D KONOTEY-AHULU
H E A V E N
O think to step ashore, and that shore Heaven,
To take hold of a hand, and that hand God’s hand,
To breathe a new air, and that air Celestial air,
To feel invigorated, and know it Immortality,
O think, to pass from the storm and tempest
To one unbroken smile,
To wake and find it GLORY!

1955: While in the middle of my pre-Clinical studies at the University College in London (UCL) I received an interesting letter from Legon. I noted the peculiar spelling of the surname “Archampong” of the writer who told me he had won a government scholarship to come to the same UCL to read MEDICINE. We began correspondence which resulted in him joining me the next year at the inter-Varsity Fellowship men’s hostel ALLIANCE CLUB at 2 Bedford Place, London WC1, just walking distance from UCL whose Anatomy Professor was none other than Professor J Z Young FRS (Fellow of the prestigious Royal Society), World-Number-One in Anatomy, and whose massive textbooks “The Invertebrates” and “The Vertebrates” were the ones used in every single university in the entire world.

1956: Archie as everybody called him began to top his Class of some 120 students from all over the world in Anatomy, Physiology, and Biochemistry the three major subjects for the 2-year Course that required studying and passing before “walking the Wards” of any medical school hospital to study the Clinical Medicine of learning what the patients were suffering from and how to treat them.

When the results of the “Second MB” at the end of the 2-year pre-Clinical Course came Archie did so well in each subject that the three professors (of Anatomy, Biochemistry, Physiology) were happy to invite him to stay on for another couple of years to do a SPECIAL DEGREE in their expertise. Archie chose to be with Professor J Z Young (Anatomy) with 10 other students – all White – picked from London University’s 9 other Medical Schools because they also excelled in the 2nd MB Examination.

That Incident: Although Professor J Z Young was “racially colour-blind” one of his senior postgraduate teachers so hated the idea that a Black African could outperform very brilliant White students that he did something that I can only describe as abominable. When Archie, totally shattered, was telling me this in The Alliance Club on returning from UCL in the evening he kept punctuating what he narrated with “Oh I can’t believe this!”, “I cannot believe what happened!” “Oh, I cannot believe this!”

He was more sad than angry, but I was more angry than sad. I asked him to report what happened to Professor J Z Young, but he flatly refused and looked forward to the next 3 years “walking the wards” at University College Hospital UCH) just across Gower Street. I had moved on from UCL to “walk the wards” at Westminster Hospital for my Clinicals while we both lived in the IVF Hostel Alliance Club in Bedford Place.

As a Clinical Medical Student Archie continued to shine remarkably in Medicine, Pathology, Surgery, Obstetrics and Gynaecology, and Psychiatry. After the 3 years of “walking the wards”, delivering babies, and visiting mental hospitals Emmanuel Archampong took the Final MB BS Exams with nearly a thousand other students from the 11 other Medical Schools comprising London University and was among the top 4 to be given Honours and Distinctions. To get Honours and Distinctions on graduating in a UK Medical School was (and still is) such a credit to the Medical School that “House Jobs” are guaranteed to those newly qualified doctors who brought such honour to the Medical School.

Professor of MEDICINE at UCH was then Sir Max Rosenheim, MD FRCP FRS President of the Royal College of Physicians, London, and Sir Max invited this Ghanaian genius to be his House Physician. Wao! Ghanaian getting what I considered the top House Job in all England?

Then what I consider a miracle happened.

Half-way through his 6-month House Job Dr E Q Archampong had a bleep call on his alert phone urgently to go and see a patient on the Private Wing of the hospital.

Quickly he made his way to the Private Ward. As he entered the private single room, he saw a very ill man breathing heavily and beckoning from amidst the pillows. “Come close” he said. Archie recognised his voice. “Please forgive me, Archie. Forgive me. Some three years ago I deceived you and deprived you of a well-earned position. Please forgive me. I have carcinoma of the lung that has spread.”

“As soon as it happened, Sir, I realised what you had done. And I forgave you” Dr Archampong responded. The doctor sank back among the pillows. He died 2 weeks later. Archie was a staunch believer in The LORD JESUS CHRIST. He did truly forgive Dr XY the moment he realised the deception he inflicted on him.

From The Alliance Club on Sundays, we used to go to All Souls Church, Langham Place, London W1 (Rev John Stott) in the morning, and to Westminster Chapel SW1 (Dr Martyn Lloyd-Jones) in the evening. Archie and I later settled at Westminster Chapel not only because Dr Lloyd-Jones had been a world-class Physician at St Bartholomew’s Hospital before he left to become preacher, but also because he was considered the greatest preacher of the 20th Century. Archie took brief respite from his busy house-job at UCH to attend the marriage ceremony conducted by Dr Martyn Lloyd-Jones on Easter Monday 1962 between Rosemary Moss and myself. The DOCTOR’s sermons so gripped and blessed us both that I brought hundreds of his tape recordings home to Ghana for weekly devotion in our home at Korle Bu on Tuesday evenings.

It was when my sister Catherine Awura-Atta was staying with us at 21 Slater Avenue on the Korle Bu Hospital Compound, and Dr E Q Archampong had returned from England as a Surgeon and wished to continue listening to Dr Martyn Lloyd-Jones’ sermons that the two of them met. And the rest is history.

She called him ‘Emma’ and he called her ‘Awura-Ata’. They were blessed with 5 children beginning with 2 adorable girls Eliz and Nana Ruth, plus 3 elegant boys David, Timothy and Ashirifi. Their mother Mrs Catherine Awura-Ata Archampong deserves FULL MARKS for raising 5 children through the most turbulent political periods in Ghana’s history with shortages of essential commodity. Queuing up for milk for the children? But difficulties did not derail her husband from hard work – teaching to produce doctors, operating sometimes far into the night, and being elevated to become Dean of the premier Medical School in Ghana.

Friends of The LORD JESUS CHRIST become enemies of GOD’s enemy – the devil. That was how I interpreted what happened soon after Emmanuel was made Dean of the Medical School. Suddenly a ferocious fire erupted in the Dean’s Office when he was not there. But for the timely arrival of Fire Engines, the entire Dean’s Block would have been burnt to ashes. Reminded me of what The LORD JESUS once said when something pernicious was done secretly: “An enemy has done this!” [Matthew chapter 13 verse 28].

Details of his monumental work in face of difficulties are mentioned elsewhere in other Tributes – University of London Master of Surgery, Fellowship of Royal Colleges of Surgeons of Edinburgh and of England, of Ghana Academy of Arts and Sciences, of West African College of Surgeons, Ghana College of Physicians and Surgeons, etc. The big Surgery book of over 1,300 pages he edited with Professor E A Badoe and Colleagues is a lasting monument for Africa. His contributions at International Conferences were enormous. As for teaching to produce doctors undergraduate and postgraduate, just look at the testimonies on WhatsApp to appreciate how highly Professor Archampong was regarded. He was rewarded with National and International Honours.

Compassion and Dedication to Duty.

When during one political upheaval with strikes and unruly soldiers invaded Korle Bu, harassing nurses and doctors many of whom fled their bungalows, as some very diligent doctors like Dr Dwomoa Adu and Dr Yaw Anim-Addo who initiated Artificial Kidney Service in the Medical Block, and Dr Ghosh of Maternity sneaked back quietly to monitor their patients, so Dr Archampong unnoticed by the soldiers would walk back from his parents’ home at Korle-Gonno to see patients he had operated upon. His compassion was proverbial. Whenever our young children were howling in pain after cutting themselves and bleeding playing in the garden at Korle Bu heard their mother say, “Uncle Archie is coming, I have called him”, miraculously all crying stopped, bleeding or no bleeding. Stitching wounds became painless. I had such confidence in him that when I was practising in London and rich Ghanaians flew across The Sahara asking me to refer them to the best surgeons for this and for that I sent most of them back to Archie in Accra with results of investigations. And they were extremely satisfied.

Family Man that will be hugely Missed

Amidst all the busy hectic routine – teaching, operating, meetings, conferences, writing articles and editing books, planning courses, administrative machinery of The Deanship, Archie found time for his family. Statement to me of Mrs Eliz Dadson, the eldest, the day their father left this Earthly Pilgrimage was as from all her siblings: Ruth Nana Anson, David, Timothy, Ashirifi, “Daddy was always there for us”. Indeed, he was. And my beloved Sister Catherine told me: “GOD called him!”

The pain is big, not only for the Archampong Family – Sister Victoria, Brother Augustus, and their families – but also for the Konotey-Ahulu Family – the families of Edna Soyannwo, Gritty Gboloo, Ruby & Jerry Djangmah, Helen & Emil Sachs, Ann and Kwesi Andoh, and my own family, Rosemary and Dawid, Carys and Lydia – we have all suffered this loss.

Archie’s Mother’s Perpetual Song – Trusting JESUS That is All

I knew Archie’s father played the organ for Church Service at Mamprobi Methodist Church, but I did not realise his mother was also musical. I can’t remember ever visiting their home in Korle Gonno without hearing his mother singing or humming this tune by Ida B Sankey [1840-1908] to words by Edgar Page Stites [1836-1921], which mysteriously came to me before I heard of Archie’s illness.

Ao, we do not weep like those who have no hope; we weep because we miss the very beloved husband, the Daddy, the grand Dad, the brother in law, the friend, the ..
We go on trusting The LORD JESUS CHRIST: That is all! 1 Corinthians 15 vs 18-19.