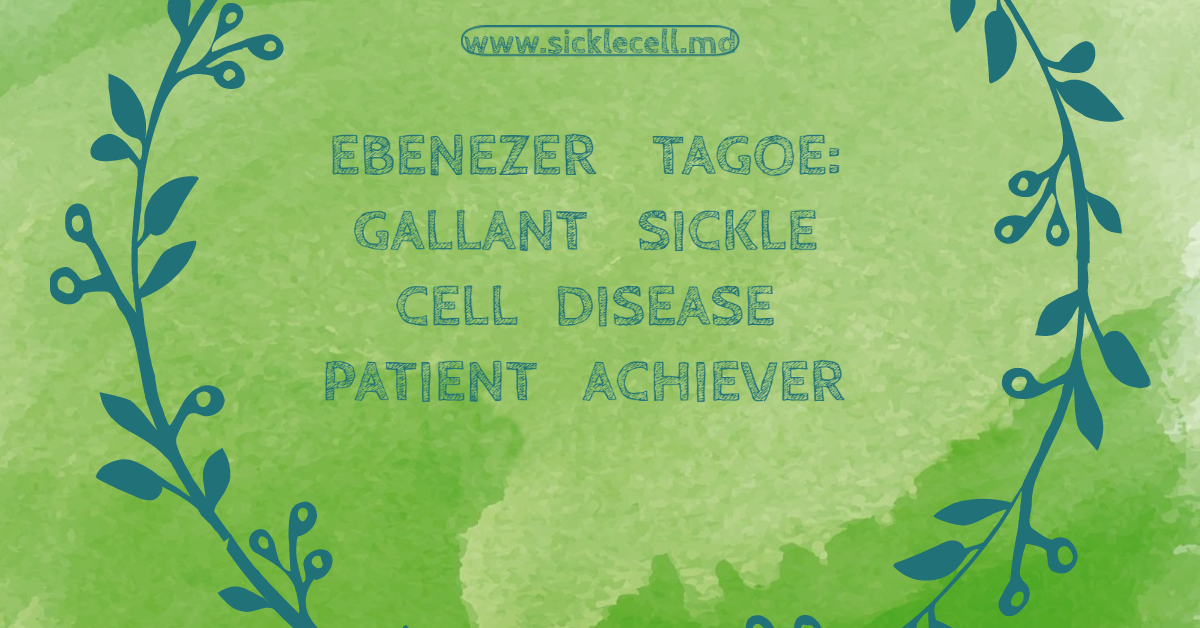 Ebenezer Mensah Tagoe was born on Ghana’s Independence Day 6th March 1957. Like 3 of the 11 children born to my own parents Ebenezer had Sickle Cell Disease the hereditary cold rainy season rheumatism that Ga people call Tswetsweetswe (Chwechweechwe) known to us long before Europeans called it Sickle Cell Disease.

Parents of chwechweechwe children passed on the ache code to the child even when they themselves may not have the “ache” problem, because it takes 2 codes of “ache”, one from father, one from mother to make the child ache with cold season rheumatism.

Like in my own family those of us 11 children receiving an ache code from one parent and the normal blood code from the other parent do not ache in the rainy season. In other words, parents who are NORM-ACHE type like my own patients pass on NORM or ACHE code to a particular child, never both.

Ebenezer, as well as my 2 brothers and 1 sister got ACHE code from both our parents to produce double ACHE which combination makes the blood cells thicken under certain conditions to cause joint and body aches characteristic of Sickle Cell Disease.

Although it was being taught that sickle cell disease patients did not live beyond thirty years of age, Ebenezer lived longer than twice of 30 years because he quickly learnt that only certain events produced the serious pains (called crises) which he learnt to avoided – things like being caught in the rain, fever, and infections. He attended and spoke at all The International Conferences of Sickle Cell Disease Patient Achievers that I organised in 1993 at Royal Society of Medicine in London, 1995 in Accra, and 2010 also in Accra where he told the audience to much amusement that he had avoided painful sickle cell crisis in the previous 20 years by drinking 4 Litres of water every single day provided he could find a suitable place to pass water. He used to educate doctors in England. Ebenezer had trained as a professional pharmacist and worked in a London University Teaching Hospital where a Consultant Haematologist could not believe he had sickle cell disease until he tested his blood to find he possessed double ACHE codes making him ACHEACHE. His parents, like mine were healthy NORMACHE capable of donating NORM or ACHE codes to their children.
Ebenezer married a lady who was NORMNORM so that none of their children would have double ACHE Chwechweechwe or Sickle Cell Disease.

By doing so well professionally as a Pharmacist in a London Teaching Hospital Ebenezer proved that the sickle cell code (S) or gene was not the only thing his parents gave him. He received from his Mum and Dad codes for beauty, brilliance, sympathy, and kindness as well as the sickle cell codes so teaching doctors how wrong it was that they should advise parents to abort a pregnancy that tested had shown would produce sickle cell disease. Doctors today, today, today are aborting sickle cell disease pregnancies unaware that they could be aborting geniuses.

The International Conferences I organised were attended by great ACHIEVERS in Nursing, Teaching, Businesses, Pharmacy, and other professions. If the parents had aborted Ebenezer, could his brilliant children have been produced through a wonderful wife who helped him in his hereditary illness? Where did these children, now adults, get their brilliant genes from? He invited me and my wife in 1994 to their 10th Wedding Anniversary in England, and I was greatly happy when he named one of his sons after me for looking after him at Korle Bu.

WE SALUTE THE MEMORY OF EBENZER MENSAH TAGOE

We indeed salute the memory of one who achieved great things through suffering. At a time when younger people than him had been taken out of this life Ebenezer Mensah Tagoe lived to 65 years, defeated his last Enemy Death, and has gone into the GLORY to enjoy LORD JESUS CHRIST. My heartfelt Condolences, and my wife Rosemary’s go to his dear mother Mrs Janet Gifty Tagoe-Quayle and his brothers Prince Nwojo Tagoe, Jonathan Adokwei Tagoe, and George Felix Ankamah Tagoe, and also to the larger family.