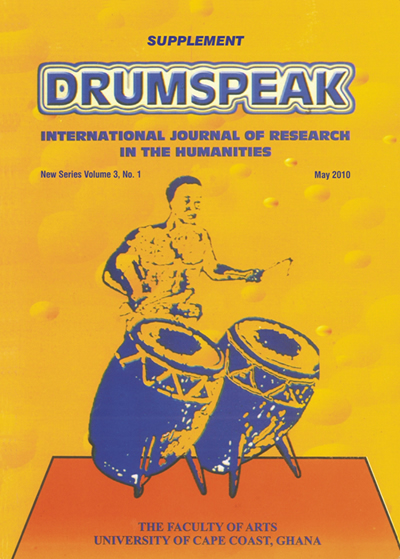 View basket “The Sickle Cell Disease Patient” has been added to your basket.
Sale!

TONIC SOLFA IS THE FOUNDATION OF TONAL LINGUISTICS – Drumspeak

Digital download of TONIC SOLFA IS THE FOUNDATION
OF TONAL LINGUISTICS

TONIC SOLFA IS THE FOUNDATION OF TONAL LINGUISTICS

[Supplement to DRUMSPEAK International Journal of Research In The Humanities. New Series Volume 3, No. 1, May 2010. The Faculty of Arts, University of Cape Coast, Ghana]

This revolutionary method of writing  tonal languages was also explained at the African American Museum Philadelphia Award Lecture by Dr Felix I D Konotey-Ahulu the Kwegyir Aggrey Distinguished Professor of Human Genetics at the University of Cape Coast, Ghana. To visit the lecture click here.

ABSTRACT
My Mother Tongue, Krobo/Dangme-Gã of south-east Ghana was
first written by the Swiss-German Basel Missionaries who not only
translated the Bible for us, but also wrote hymns for us with the
help of local experts born in the Gold Coast. They did a remarkable
job, but as the Ghanaian vowel imparts no less than 6 meanings to
any consonant my parents and grandparents had to look at the
context in which a written word appeared before pronouncing the
word correctly. For example, the word written ‘ta’ can mean chew,
war, giant ant, to fish out of a bowl, palm tree, or narrate in
Krobo/Dangme. My parents were adept at quickly scanning a
sentence mentally before deciding what the ‘ta’ they had just read
stood for. Their children and grandchildren do not have the
patience to decipher the meaning of biblical sentences and hymns,
to our great loss. None of the attempts made by experts in
Linguistics at home and abroad to make it easy for me to read my
Mother Tongue has proven acceptable to me. I have devised a failproof
method to identify the tone of every vowel in my Mother
Tongue so precisely that a non-native, following my rules, can
phonate a word exactly and as accurately as a native. I have
employed Tonic Solfa and sound colouring as the fail-proof
methods of achieving my objective. No vowel should ever be written
vi
in Tonal Linguistics without ‘pitch’ and ‘quality’. Pitch is,
normally, high, mid, lower-mid, and low, while quality is nasal or
non nasal. Most of the time high, mid, and low pitches operate, but
sometimes lower mid-pitch is called for to impart the correct
meaning. That the phenomenon of ‘mid pitch arrest’ in
Krobo/Dangme, and ‘lower mid-pitch arrest’ in Gã has not been
described before in the leading textbooks of Linguistics is probably
because experts have been unable to pinpoint exactly (that is
mathematically) where these arrests occur between high pitch and
low pitch. I have established that normal human speaking voice
spans an octave, and that mid pitch is exactly 3 semi tones below
high pitch, while lower mid pitch is 2 semi tones below mid pitch
not only in my Mother Tongue, but also in English as demonstrated
below. These precise pitches can be arrested and assigned to
consonants to mean just what the speaker intends. Tribes that
display this phenomenon may be related genetically, allowing
research in Glossogenetics aided by the present global genome
sequencing exercise. Scientists denying that there is design in the
universe are simply wrong.

There are no reviews yet.